Posted on April 9, 2018 by Katherine Gallant 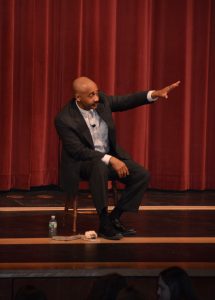 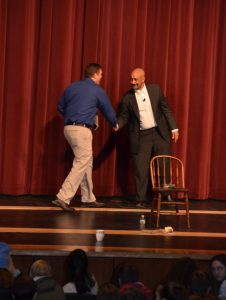 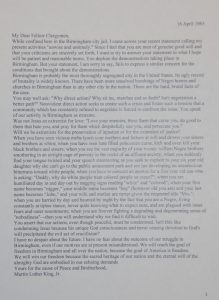 Part two of the Celebrating Diversity: American Voices grant took place a few days after the Langston Hughes performance when the YPAC was filled to capacity with Freshman, Sophomores and 8th graders. This time, David Mills transformed himself into Dr. Martin Luther King Jr.

Mills recited excerpts from King’s speeches and letters, including “I Have a Dream,” the famous “Letter from a Birmingham Jail” and “If I had Sneezed.” In between the speeches, he performed interludes to bring the audience from one stage of King’s life to another. One of the interludes discussed how King felt when four girls were killed in the Alabama church in 1963, just days after giving his “I Have a Dream” speech. It was a powerful performance.

The afternoon continued with a workshop in Mrs. Ruthman’s Sophomore Modern World History class. Mills started off the class by giving the students some historical context around the letter that King wrote from his jail cell in 1963. He talked about the bus boycott, the protests in Birmingham (which was nicknamed “Bombingham”), and why King was imprisoned. When talking about King’s letter from jail, Mills explained how he appealed to the reader on an emotional and intellectual level through his high rhetoric. Mills described the letter as an “epistolary poem,” which is a poem in the form of a letter. After the class read the “Letter from a Birmingham Jail,” line by line. They discussed setting, repetition, meaning, parallel syntax, alliteration, paratactic syntax, hypophora, antithesis, anaphora, periodic sentences and metaphors.

After the lesson on the literary devices found in King’s letter, the students were asked to write their own “epistolary poem” and include the elements they just learned from King’s letter. They were charged with writing about an experience they had in their own lives where they had been misunderstood, hurt or disrespected by someone with whom they were not able to respond to.

This program was timely, as the Freshmen curriculum includes a section on Americans who are positive agents of change. Sophomores study themes such as social justice and civil rights throughout the year.

Though the grant was written for the high school students, it was a great opportunity for the 8th graders to join in and benefit from the performances as well. I was impressed with the response, as a few of the 8th graders shared their reactions with me.

“I loved it! The acting was amazing and I learned a lot of things about King’s struggles that I wasn’t aware of,” said one 8th grader. “I had no idea how vicious racism could be. I was struck by the phone threat King received where they said they would kill his wife and daughter. My big takeaway was that hatred is pointless.” 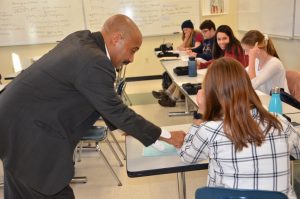 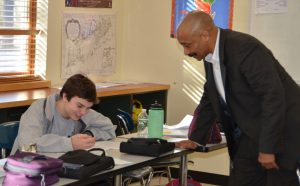 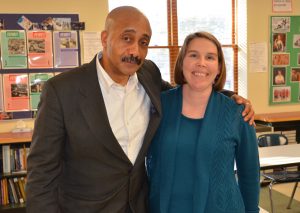